Additional Tests & Tryouts
Some more tests I did to learn:

Tested how the upgrade icons levels work. So obviously level 2 in the .nds file [UPGRADE] sectionwill show a II symbol on the icon. It seems only to go till 7, then the symbol changes in a square like this if you put level 10 for example: 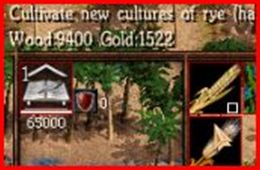 Adding an 18th century to Algeria eg. Look at Austria.nds how it has been implemented. It’s pretty straight forward to do this. Make sure you enable all entries correctly. ( MAINAU,...)

How to make an new century epoch: fairly easy actually , you should be able to do so by now, but here it goes in short. Use an icon ( that is already there for speeding up), copy the XVIII upgrade, rename it, use icon, fill out all necessary entries and done. ( well, this might take an hour or so the first time ;-)  )

How to change the starting resources for eg. Normal- rich- thousands:
Go to TERR+RES.DAT, there you can find the different amounts you will get in game for those certain options.
If you want to change the resources for normal to 2500 each, just change the 1000 into 2500. RES.DAT is where it gets the information, the description for these options it gets from TEXT6.TXT.
Suppose you want to change or add a new option, then you have to change these in both files and pay attention to the numbers, for example RA_Lean section has above it nr 3, which refers to 3 options, so if you want to add eg RA_Very Rich, don’t forget to add 4 instead of 3. The second number is a constant.Time to see if it works ;-)
Well as expected first time I messed up, I got an error stating that RES.DAT was corrupted in the mine section . Probably cause I forgot there is a 3rd file involved.
These are the files that need changes if you want to add a new options for minerals, start resources, etc…: 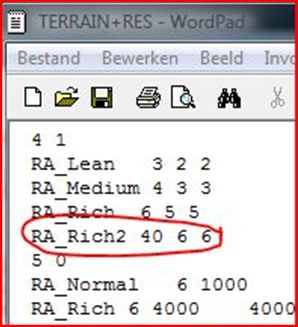 I used RA_Rich2 cause it doesn’t seem to recognize other words in this section. 40 means 40 goldmines, just for fun & testing ;-)
To show up the correct text in the menu options it gets info from this file: 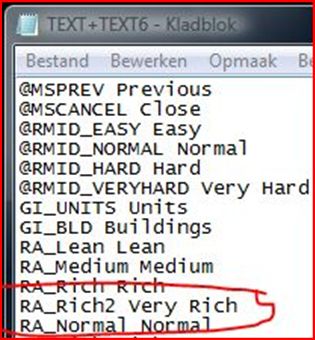 And in the 3rd file it gets its information to display at the bottom of the screen: HINTS.TXT 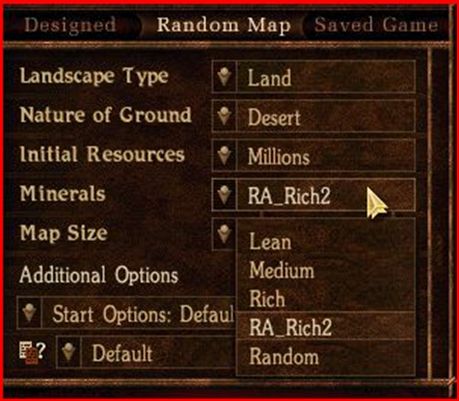 This you get if you don’t fill out the start6.Txt properly, but if you do it right you get this: 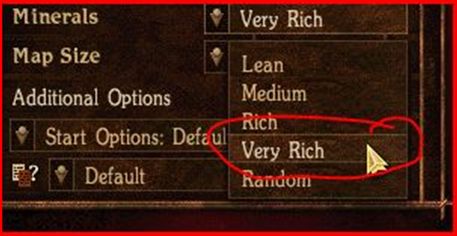 And the information at the bottom of the screen ;-): 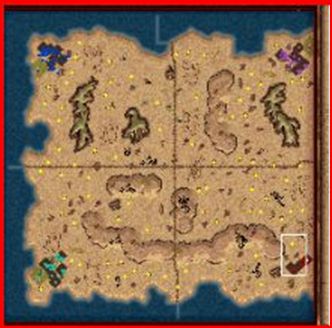 Well that was fun. But I hope you get the general idea of how to alter or add new options.

Perhaps let’s have a look at the additional options. Like for example if you select, army of peasants, or different nations, or 18th barracks as start options.
Let’s see if we can change one of those, and perhaps add a stable or something from the start.
So we are looking at DATA+START.DAT files now and probably some text files we might have to change aswell.
DATA+START4 is for example for AOP ( army of peasants). Lets’ use this one and add a stable for Bavaria to it.
This is what it looks like original: 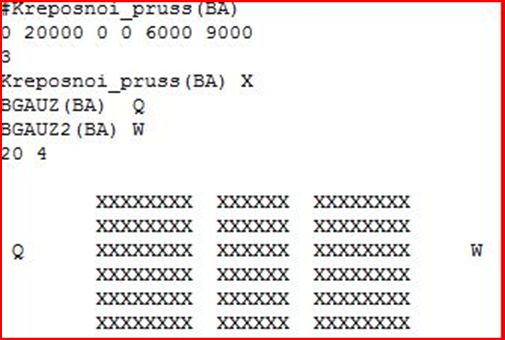 And this is what i changed it into: 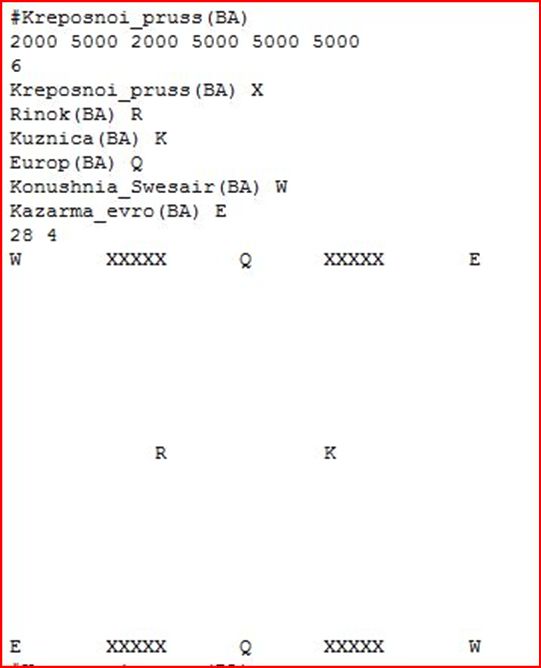 So you can see we added a market ( rinok), a blacksmith (kuznica), a townhall ( europ), a stable ( konushnia) and a barrack 17th ( kazarma)
The 6 above the list of buildings refers to the number of buildings ( 6 In this case, to 3 in original)
2nd line are resources obviously.
Pay attention here if you change anything. For example if you play normal ( 1000) then it adds the resources defined here on top of the existing start resources ( so 1000 + 9000 = 10 000 coal to start with.
And then the letters refer to the buildings. You can actually place them anywhere you like, as long as you take in to account to leave some spacings inbetween.

To change the description of the newly added option ( or modded one actually) go to  START.TXT 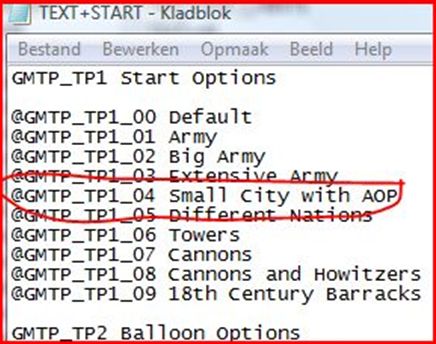 So these 2 files in your mod:

Make patch (mod) & run dmcr
And it should look like this in the game menu : 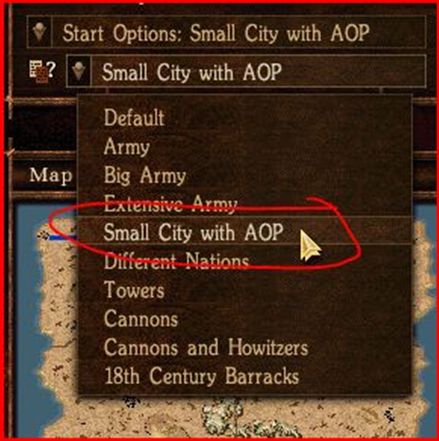 So in game its looks like this on starting:

So that went pretty easy. It doesn’t seem to have a reference to hints to show up at the bottom of the screen for additional options. So only 2 files to change.
One thing though, it doesn’t show up on the minimap in the preview of the random game menu. Gotta find where that is being defined. It still shows up as an AOP.
Also be carefull not to overdo this one. To many buildings on the start up may cause problems on small maps ( cities expanding over the peace time borders , mines, etc…)
Remember : " Less is more "

Test: allowing a building to be present under certain circumstances: eg a new tower that is only available if option art is on.
Mainly in nation.nds and obviously the new files ( MD + GP and possible new icon)
EG a new tower based on the blockhouse ( BGAUZ.MD): 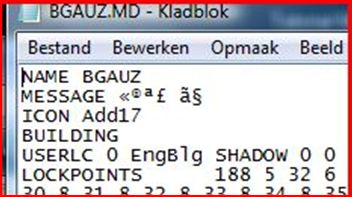 In nation ( Turkish.nds) add the BGAUZ(TU) BGAUZ under [MEMBERS] [FIXED PRODUCE] and [ENABLED]
Further if you want this tower only to show up when art(&walls) options are enabled add it under [SPECIAL UNIT] like this:

Other optional options here are to limit it like only 4 of these buildings max under [UNITLOCK]
Give it upgrades ( like towers), etc…
Create the patch
Run dmcr
Ingame it looks like this: 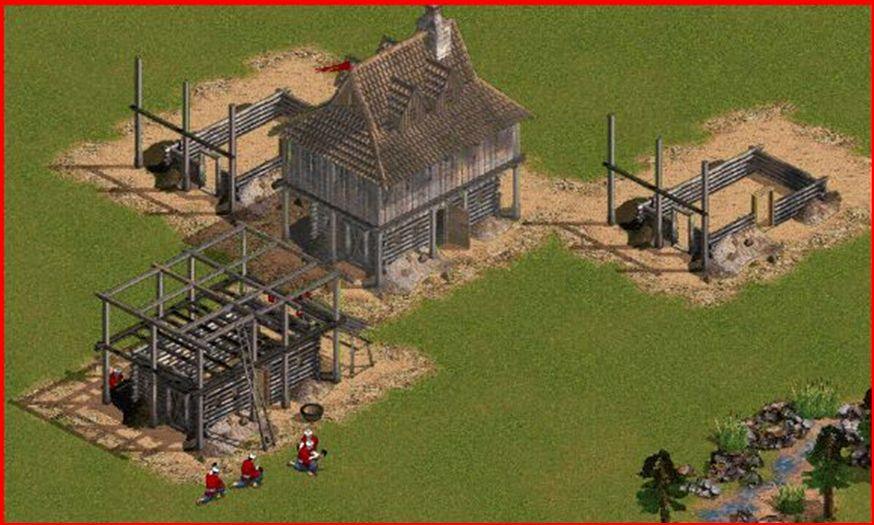 Notice how there is a peasant building backwards. I didnt not change the building points here in the md file.

Test :Enabling a building only after a certain upgrade has been done: eg the diplo is only allowed after an upgrade in the academy has been researched.

In Nation.nds
Use the icon for diplo ( IE_Dpc ) , add it under the academy upgrades

Mind you could easily use another number like AKA34TU as long as you follow the rules.(you should know how academy upgrades work by now)
Don’t forget to add it under [UPGRADENABLE]
Then add it under [ACCESSCONTROL] so the diplo becomes available after the upgrade:

Then add your new upgrade also to COMMENT+TEXT like this:

Next test: Let’s build further on our last example:
This time we will make it so that this upgrade is only available under certain circumstances ( start options) so that if the player wants, he can also play the game without having to do the upgrade in order to build a diplomatic center.
So in nation.nds add under [SPECIAL UPGRADE] the upgrade ( AKA26TU) like this:

Obviously this is done by renaming the 18th century options and for turkey it can easily be used since it has no 18th, but for other nations this causes an issue ( unless you omit 18th or play without these specific options)
You could also do a group of buildings that becomes available just like the 18th has been implemented for the 18th barracks but with your own buildings and upgrades… or all together only allow the diplo to been build in 18th century, but then you only need to change the nds file under [ACCESSCONTROL]

Total online: 1
Guests: 1
Users: 0
TODAYS VISITORS
warlord469
Recent Comments
17c Hist. Hardcore Mod
I have been looking for this mod for a couple of days now and haven't found any working downloads, no Dropboxes have the file anymore and the links from Loner (from Cossacks 3 page) don't have it either. Does anyone have this mod still available?
Europe Bitmap
Thank you.
C2: Ultimate Skirmish Pack
Спасибо большое!
C2: Ultimate Skirmish Pack
hello, im having a problem with the AI. when i start a game with more than two factions, only one enemy faction has AI, the rest dont move at all. Thanks
Imperia Mod ( English )
Imperia mod does it work on Steam or Gog Version ?